President Nana Akufo-Addo will on Friday, December 13, 2019, meet members of the press at the Jubilee House.

The encounter is expected to afford invited journalists the opportunity to ask the President some critical questions as well as topical issues in the country as far as his three-year-old administration is concerned.

President Akufo-Addo had earlier made a strong case for such meetings arguing that it was a crucial approach to engage Ghanaians and take criticisms to shape the government’s flagship programmes and policies.

It is also not the first of its kind.

This is the fourth time the President is opening himself up for questioning having done same in July 2017 and January 2018.

The last edition was held a year ago in December 2018.

In that encounter, 70 journalists were invited but only 15 journalists had the chance to ask questions because of the about 30 minutes delay of the start of the program. 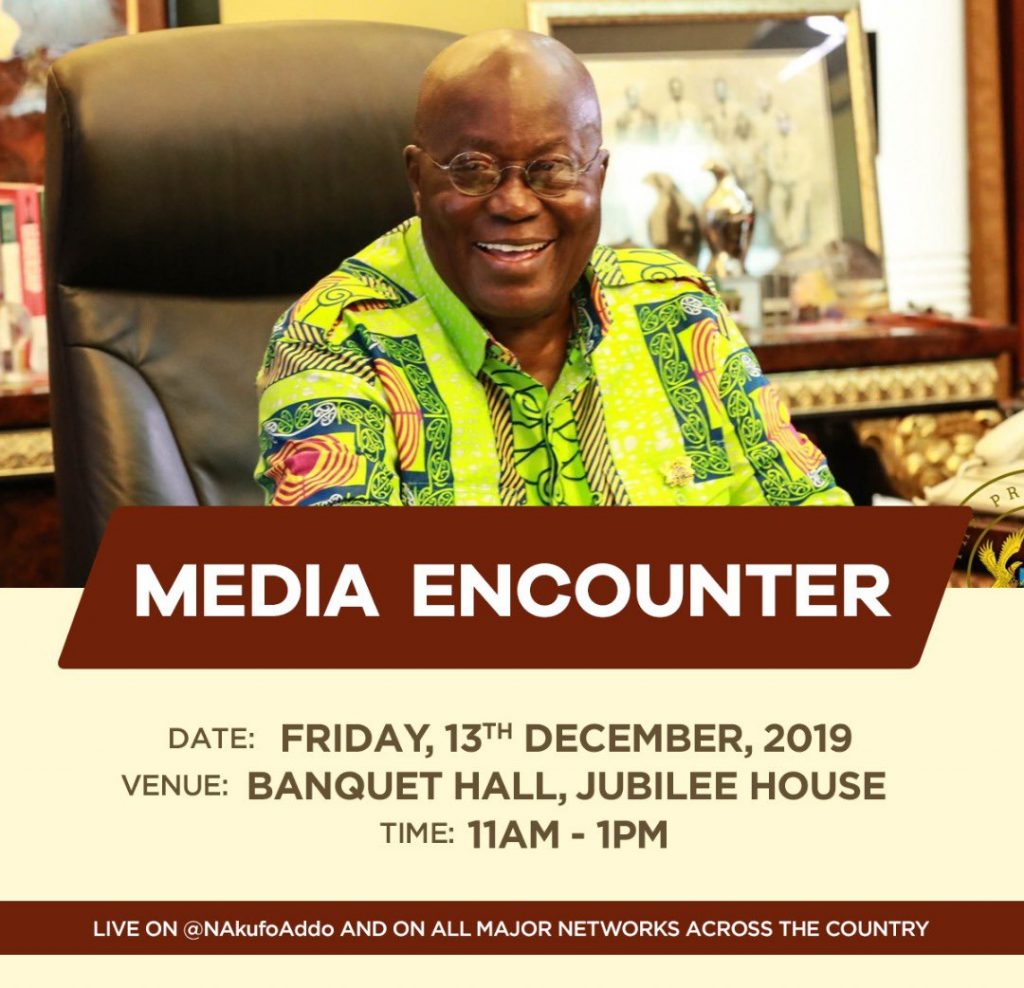 A year after however,  there have been many new and controversial developments within the governing New Patriotic Party (NPP) which the president may not have clarified hence; Friday’s meeting is expected to among other things provide more details on such matters.

The Media Foundation of West Africa (MFWA) criticised the President’s meeting with journalists and described its as the worst presidential media encounter ever.

Its President, Sulemana Braimah also observed that President Akufo-Addo “clearly wasted too much time” on some of the questions that demanded straightforward answers.

One major point of concern for him was that the President appeared to hog all the time from the media members present for a speech which Mr. Braimah described as “a rehearsal for his State of the Nation Adress.”

“If you have an encounter that lasts for 90 minutes and the President spends almost 70 minutes out of that then you have 20 minutes for these media guys that you have invited to interrogate you. I think that there are quite a number of disappointments and generally we think this is the worst ever,” Sulemana Braimah said.

The President’s handling of the event was also met with some negative reviews from Ghanaians.

A number of Ghanaians also pointed out that the event was too short and the time was not managed properly whilst others sought to poke fun at the government.

I Was In Support Of Compiling A New Register – Joyce Aryee

Why Should A Past President Dream Of Contesting An Incumbent? – Akufo Addo Asks

Did Former President Jerry Rawlings Really Beat Up His Veep In A Political Feud?

I Am A Prostitute And I Enjoy It – Afia Schwarzenegger